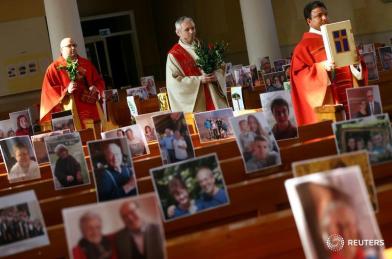 Early on the first day of the week, while it was still dark, Mary Magdalene came to the tomb and saw that the stone had been removed from the tomb. So she ran and went to Simon Peter and the other disciple, the one whom Jesus loved, and said to them, “They have taken the Lord out of the tomb, and we do not know where they have laid him.” Then Peter and the other disciple set out and went toward the tomb. The two were running together, but the other disciple outran Peter and reached the tomb first. He bent down to look in and saw the linen wrappings lying there, but he did not go in. Then Simon Peter came, following him, and went into the tomb. He saw the linen wrappings lying there, and the cloth that had been on Jesus’ head, not lying with the linen wrappings but rolled up in a place by itself. Then the other disciple, who reached the tomb first, also went in, and he saw and believed; for as yet they did not understand the scripture, that he must rise from the dead. Then the disciples returned to their homes.

But Mary stood weeping outside the tomb. As she wept, she bent over to look into the tomb; and she saw two angels in white, sitting where the body of Jesus had been lying, one at the head and the other at the feet. They said to her, “Woman, why are you weeping?” She said to them, “They have taken away my Lord, and I do not know where they have laid him.” When she had said this, she turned around and saw Jesus standing there, but she did not know that it was Jesus. Jesus said to her, “Woman, why are you weeping? Whom are you looking for?” Supposing him to be the gardener, she said to him, “Sir, if you have carried him away, tell me where you have laid him, and I will take him away.” Jesus said to her, “Mary!” She turned and said to him in Hebrew, “Rabbouni!” (which means Teacher). Jesus said to her, “Do not hold on to me, because I have not yet ascended to the Father. But go to my brothers and say to them, ‘I am ascending to my Father and your Father, to my God and your God.’” Mary Magdalene went and announced to the disciples, “I have seen the Lord”; and she told them that he had said these things to her.

We read this story every Easter morning.  But the original account was not filled with Easter lilies and chords of “Christ the Lord is Risen Today”.  It was not in a packed sanctuary with an air of celebration.  It was somber, a solemn and silent processional of grief and regret.  The air in the garden was heavy and damp and the sounds of the night were just beginning to fade away.  And, contrary to contemporary theology, finding the tomb empty would not have been a glorious site. The body of their Lord had not been properly prepared and now it was gone.  The grief was even worse than before.  Now it was mixed with a sense of being violated.  She had been crying for days but Mary began to weep tears that she did not realize she still had.

But, turning around, she saw him.  It was unthinkable at first.  It must just be someone that resembles him.  But when he called her, when he said her name, she knew.  She wanted to grab and hold him forever.  But instead, he backed away, and told her to go tell everyone. She ran, not really even knowing where she as getting the energy.  She ran to tell them that she had seen him, that he had spoken to her, that in some way that she did not yet understand, Christ was alive!

The story will be different for us this time.  We, too, will miss the packed sanctuaries with an air of celebration.  For all practical purposes, Easter is canceled.  Who would have ever imagined this before?  Who would have ever thought that on the day when more people attend worship services than any other in the year, the sanctuaries will sit dark and empty?  I suppose some of us, too, feel a little violated, like something has been taken from us.  I mean, when you strip away all the crowds and all the music and all the liturgy and all the Easter lilies, what is left?  Well, there’s still that empty tomb.

So on this day, without the Easter celebration to which we’ve grown so accustomed, without the crowds gathered to celebrate the Risen Christ together, sit quietly at the tomb yourself and ponder this thing that has happened.  Christ is Risen and so are we!  The promise of Easter is that we will remember that resurrection did not just happen once.  Instead, it happens every time one of us says, “I have seen the Lord.”  We can cancel Easter.  But resurrection is everlasting.

Resurrection Sunday is about reconciling the light within us with the darkness around us. Jesus, you see, did not leave us with empty longing; Jesus left us with light, a direction, a way, a meaning, a truth. Consequently, the Resurrection did not change the world. On the contrary, the Resurrection changed the apostles who are supposed to change the world. What is supposed to be celebrated on Easter Sunday is not only that Jesus has risen but that we have risen by His rising to become something new and something bold and something strong.  (Joan Chittister)

Happy Easter!  Go and live your resurrected life! Next year may we celebrate together!

SHORT PROGRAMMING NOTE:  Thank you for spending this sort of odd Holy Week with me!  I’ve been glad to be back at writing.  Look for me to post to this blog going forward each week (probably sometime early in the week) for the following Sunday’s Lectionary text.  Hope you’ll stay tuned!  Happy Easter!

One thought on “Canceling Easter”