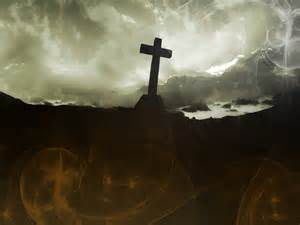 Well, you have to give Paul credit. After all, he’s the only one that actually said what we were all thinking out loud. Admit it, you were. I mean, really? After years and years (no scratch that, after centuries and centuries and centuries) of waiting for a Savior, waiting for the Messiah, he finally shows up. He’s from a no-name-blip-on-the-road town and is born in another no-name-blip-on-the-road town to young, no-name working-class peasants. He’s born in a grotto of some sort and is placed in a feed trough. Then after a considerable amount of hoopla surrounding his birth, he sort of drops out of site for three decades or so. Then he sort of bursts onto the scene to take on the world. He’s baptized in a river by some relative of his that lives in the wilderness and wears camel hair and eats locusts. Then he goes out and lives in the desert for six weeks or so completely alone. Then instead of hobnobbing with those who had the power to really finally make his ministry fruitful, he hangs around the Lake of Galilee for a couple of years gathering other no-name folks to help him out. He shies away from things like pledge campaigns and evangelism programs and instead opts to tell stories, to stand out in the weather and the elements and try to get people not necessarily on board with his fledgling ministry but just to turn their lives around. He never even, as far as I can tell, took up an offering unless you count that meager fish lunch that somehow he managed to use to feed the multitudes. Then this young itinerant pastor and his motley brood make their way to Jerusalem. They go right in the gates, taking on the best and the brightest, taking on the Holy City itself. Well, we know how it all turned out. Because, you see, when you take on the strong and the powerful, when you begin to unseat those in charge, when you point to their vulnerabilities, to their shortcomings, it seldom ends well. You know, there are seasons and places where that can get you crucified!

So, we try our best to make the story presentable to the world. We polish the gleaming cross at the front of the sanctuary. We make the pews comfortable with back support. We spend hours making the bulletin user-friendly so it will all make sense. Maybe once in a while, it would do us good to embrace the sheer foolishness of it all instead of trying to make it presentable to the world. After all, this promise of Life did not come to us unscathed. God’s promise is life born of death. It does not just appear in the midst of a beautiful array of carefully-placed lilies on Easter morning. God took something so horrific, so dirty, so unacceptable and recreated it into Hope Everlasting. But in terms of what we know, what we expect, even what we deserve, it is an act of utter foolishness. Perhaps wisdom, though, is not about worshipping a gleaming, pristine cross but rather looking at an instrument of death and seeing the life it holds. Because, you see, if it all made sense, we wouldn’t need it at all.

“If the world is sane, then Jesus is mad as a hatter and the Last Supper is the Mad Tea Party…In terms of the world’s sanity, Jesus is crazy as a coot, and anybody who thinks he can follow him without being a little crazy too is laboring less under a cross than under delusion.” (Frederick Buechner, “The Faces of Jesus”)

FOR TODAY: Be foolish. Surrender. Give your life away. Love your neighbor. (Hey…be REALLY foolish and love your enemy). Follow Christ…all the way to the Cross. (But be careful…that doesn’t always end well.)