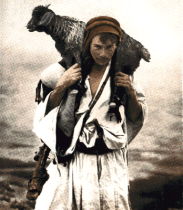 The Lord said to Samuel, “How long will you grieve over Saul? I have rejected him from being king over Israel. Fill your horn with oil and set out; I will send you to Jesse the Bethlehemite, for I have provided for myself a king among his sons.” Samuel said, “How can I go? If Saul hears of it, he will kill me.” And the Lord said, “Take a heifer with you, and say, ‘I have come to sacrifice to the Lord.’ Invite Jesse to the sacrifice, and I will show you what you shall do; and you shall anoint for me the one whom I name to you.” Samuel did what the Lord commanded, and came to Bethlehem. The elders of the city came to meet him trembling, and said, “Do you come peaceably?” He said, “Peaceably; I have come to sacrifice to the Lord; sanctify yourselves and come with me to the sacrifice.” And he sanctified Jesse and his sons and invited them to the sacrifice.  When they came, he looked on Eliab and thought, “Surely the Lord’s anointed is now before the Lord.” But the Lord said to Samuel, “Do not look on his appearance or on the height of his stature, because I have rejected him; for the Lord does not see as mortals see; they look on the outward appearance, but the Lord looks on the heart.” Then Jesse called Abinadab, and made him pass before Samuel. He said, “Neither has the Lord chosen this one.” Then Jesse made Shammah pass by. And he said, “Neither has the Lord chosen this one.” Jesse made seven of his sons pass before Samuel, and Samuel said to Jesse, “The Lord has not chosen any of these.” Samuel said to Jesse, “Are all your sons here?” And he said, “There remains yet the youngest, but he is keeping the sheep.” And Samuel said to Jesse, “Send and bring him; for we will not sit down until he comes here.” He sent and brought him in. Now he was ruddy, and had beautiful eyes, and was handsome. The Lord said, “Rise and anoint him; for this is the one.” Then Samuel took the horn of oil, and anointed him in the presence of his brothers; and the spirit of the Lord came mightily upon David from that day forward. Samuel then set out and went to Ramah.

In this Lenten season, what would change about our journey if we knew where we would end up, if we thought that we might end up in a place that we didn’t plan?  And what would change about our life if we knew how it was all going to turn out?  I mean, think about it…the boy David is out in the field just minding his own business and doing what probably generations of family members before him had done.  Perhaps his mind is drifting off in daydreams as he sits there with the sheep.  Perhaps he is thinking about what his life will be, where he plans to go, what he plans to do.  He sees his brothers leave and go inside one by one, probably wandering what in the world is going on.  Finally, he is called in.  “You’re the one!”  “What do you mean I’m the one?” he probably thought.  “What in the world are you talking about?  Don’t I even get a choice?”  “Not so much.”  And so David was anointed.  “You’re the one!”

What would have happened if David has just turned and walked away?  Well, I’m pretty sure that God would have found someone else, but the road would have turned away from where it was.  It would have been a good road, a life-filled road, a road that would have gotten us where we needed to be.  But it wouldn’t have been the road that God envisioned it to be. We know how it all turned out.  David started out by playing the supposed evil out of Saul with his lyre.  He ultimately became a great king (with several bumps–OK, LOTS of bumps–along the way!) and generations later, a child was brought forth into the world, descended from David.  The child grew and became himself anointed—this time not for lyre-playing or kingship but as Messiah, as Savior, as Emmanuel, God-Incarnate.  And in turn, God then anoints the ones who are to fall in line.  “You’re the one”.

Do we even get a choice, you ask?  Sure, you get a choice.  You can close yourself off and try your best to hold on to what is really not yours anyway or you can walk forward into life as the one anointed to build the specific part of God’s Kingdom that is yours.  We are all called to different roads in different ways.  But the calling is specifically yours.  And in the midst of it, there is a choice between death and life.  Is there a choice?  Not so much!  Seeing the way to walk is not necessary about seeing where the road is going but knowing that the road is the Way.  So just keep walking and enjoy the scenery along the way!

See, we are no different.  We are all chosen, all, on some level, anointed to this holy work.  We can ignore it.  We can cover our ears and cover our eyes and shroud ourselves with excuses and keep walking the way that we would like.  It will get us somewhere, perhaps somewhere that is good and wonderful and makes us feel good.  But what happens when God calls us from the fields and interrupts our daydreams?  What happens when God has something else in store for us?  Each of us given specific and unique gifts.  We are all called.  It’s not a goal to pursue but a calling to hear.  Our lives are the way we live into that call.  This is the one.  We are the ones.  We are the ones for which we’ve been waiting.

You have been telling the people that this is the Eleventh Hour.  Now you must go back and tell the people that this is The Hour.  And there are things to be considered:  Where are you living?  What are you doing?  What are your relationships? Aare you in right relation?  Where is your water? Know your garden. It is time to speak your Truth. Create your community. Be good to each other. And do not look outside yourself for the leader.  This could be a good time! There is a river flowing now very fast. It is so great and swift that there are those who will be afraid. They will try to hold on to the shore. They will feel they are being torn apart, and they will suffer greatly.  Know the river has its destination. The elders say we must let go of the shore, push off into the middle of the river, keep our eyes open, and our heads above the water. See who is in there with you and celebrate.  At this time in history, we are to take nothing personally. Least of all, ourselves. For the moment that we do, our spiritual growth and journey comes to a halt.  The time of the lone wolf is over. Gather yourselves!  Banish the word struggle from your attitude and your vocabulary.  All that we do now must be done in a sacred manner and in celebration. We are the ones we’ve been waiting for. (The Elders Oraibi, Arizona Hopi Nation)