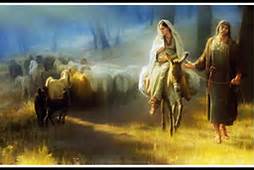 In those days a decree went out from Emperor Augustus that all the world should be registered. This was the first registration and was taken while Quirinius was governor of Syria. All went to their own towns to be registered. Joseph also went from the town of Nazareth in Galilee to Judea, to the city of David called Bethlehem, because he was descended from the house and family of David. He went to be registered with Mary, to whom he was engaged and who was expecting a child.

The journey has begun.  We know the drill.  We’ve seen the pictures of the very-pregnant Mary on the donkey with a worn-out Joseph leading the way on the road to Bethlehem.  We know the story.  They were going to Bethlehem, to the city of Joseph’s ancestors.  Now there are reputable scholars that claim that more than likely the writers of Luke and Matthew’s Gospels were mistaken.  There was not,after all, a requirement to return for this registration and so, perhaps, Jesus was actually born in Nazareth (as in the “Jesus of Nazareth”) or EVEN in a small town outside of Nazareth called Bethlehem of Galilee, a Roman-Byzantine town in the northern part of the Jezreel valley.  (Again, does it matter?)  But to make this story work with all the Christmas carols and the myriads of Nativity scenes, they need to go to Bethlehem of Judea.  And so it becomes our journey. 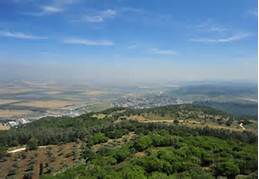 The 80-100 mile journey probably would have taken about 8 days if Mary was truly bouncing along on some sort of equine creature. So in the second day of their journey, they would have entered the Jezreel valley south of Nazareth and journeyed along the hills of Samaria.  It’s really a foreign concept to us, this traveling of about 10 miles a day or so through weather and wild animals and the certain threat of bandits and thieves as they neared what was essentially foreign territory for them.  But I’ve always had this sense that they did not travel alone but rather were accompanied by other family members, townspeople, or others that would have joined them along the way.  Sadly, I guess I envision traffic!  I mean, after all, this thing didn’t happen in a vaccuum.  Life was going on even in that moment. And life includes traffic!

That’s the way journeys are.  We seldom travel alone.  Together, we begin to let go of what we know, leave behind our securities and all things familiar.  We try to come prepared, packing as many provisions as this poor donkey can hold. And then we try our best to make our way through the sometimes-rough terrain.  So, why do we go through this?  Well, have you ever noticed that the entire Bible is full of people on the move, migrating from one country to another, from one way of being to another?  I mean, it started with that garden story when, essentially, Adam and Eve were moved on for whatever reason.  And Abraham, well he was like the journeying king, dragging his family across miles and miles of land in search of a promise.  In fact, that was the whole deal.  You know, “if you’ll leave your country and journey to a place that you’ve never seen and that you don’t know, this is all going to turn out.” (or something like that).  And then Moses, ah…Moses…dragging hoards of people through wilderness wanderings for 40 or so years.  Are you sensing a pattern here?  Maybe it’s not about where we are headed but the journey itself.  After all, we know this whole Bethlehem tale.  We know that they’ll get there and there won’t be a place.  There’s never a place.  None of these people built a mansion and settled in the gated communities of their lives.  They kept going, sometimes making it and sometimes never seeing the place to which they were journeying.

Our journey is no different.  There’s never a place.  You see, God does not call us down roads that are paved with our plans and our preconceptions.  God calls us instead to travel through the wilds of our lives, to journey with our eyes open that we might see this new thing that God is doing.  T.S. Eliot once said that “the end of all our exploring…will be to arrive where we started…and know the place for the first time.”  There’s never a place.  We never really “arrive”.  The journey does not end. It’s always new, re-created.  That’s the point.   After all, even Mary and Joseph turned and made their way home.  But they were never the same again.  And the baby that is coming?  Well, he was never meant to settle down and stay put.  And there was never really room for him at all.  God didn’t intend to show us how to build a house; God revealed the journey home and threw in traveling mercies on the way. So, let us go and see this thing that the Lord has made known to us!

God travels wonderful paths with human beings; God does not arrange matters to suit our opinions and views, does not follow the path that humans would like to prescribe for God.  God’s path is free and original beyond all our ability to understand or to prove.  (Dietrich Bonhoeffer, in Christmas With Dietrich Bonhoeffer, Manfred Weber, ed.)