Skip to content
HomeOn the Other Side of the Manger 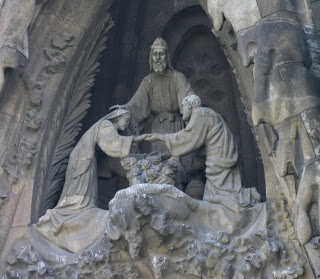 This past Wednesday night, I had the opportunity to lead an Advent discussion with members of St. Paul’s Hispanic Congregation.  No, my Spanish has not had a sudden improvement.  We slowly went through the discussion and the questions and answers by translating back and forth between English and Spanish.  (Boy, I need to brush up on my Spanish!  The closest I could get is that I would sort of understand the “gist” of the question before Nataly or Mireya translated it for me!)  But I must admit that I also had to brush up on the subject matter.  I must have drawn the short straw or something because my subject matter was Joseph of Bethlehem, husband of Mary, earthly father-figure (for want of a better word) for Jesus.  Joseph?  What is there to say about Joseph?  I mean, Mary has a big moment with the top angel Gabriel, followed by the entire world that waits for her answer.  She even has a song!  And she remains a top character in the plot all the way to the bitter end.  But Joseph?  I think if I were Joseph, I would attempt to renegotiate my contract or something.  I mean, he doesn’t even have a speaking role!  He has no voice!  So, really, what is there to say about Joseph?

We don’t really know that much about him.  His family was probably of Bethlehem, even though he perhaps lived in Nazareth.  One might surmise that he was there for work and, yet, Nazareth wasn’t exactly a thriving metropolis with numerous opportunities for a struggling carpenter.  (That probably meant that Joseph was a builder, the Greek techton, perhaps a stonemason.  After all, how much wood is there really in Israel?)  His and Mary’s was probably an arranged marriage.  Some think that he might have been older.  OK, there’s no real support for that, but whatever…But we know that he was righteous, probably a faithful “rule follower” of the Jewish law.  And he had plans.  He and Mary would marry and have children of their own.  He would have a son.  He would have the privilege of naming him.  But that was not to happen.  Instead, the lovely Mary goes and gets herself knocked up.  Think of what Joseph felt–betrayal, embarrassment, hurt, regret, confusion.  This was not the plan.

And then the dream.  Oh, that’s dangerous.  Biblical dreams never seem to help one’s plan.  Seldom does an instrument of God show up in one’s dream to tell us how great we’re directing our lives!  So, whether Joseph dreamed of an angel, or God, or his own conviction, he realized that in spite of all the rules that had been broken, in spite of the way that life had literally spit on his plan, he loved Mary.  He realized that he was called to be a part of this.  He realized that regardless of what the world told him to do–divorce her silently or accuse her publicly–he could not.  And so, there’s Joseph on the other side of the manger.  The picture is in every Nativity image we have–the Blessed Mary, the mother of Christ looking adoringly at the infant in the manger.  And standing across from her in silent commitment is Joseph of Bethlehem.

This silent figure does not, I think, get his due.  After all, his entire life changed as much as Mary’s.  His plans had to be shelved.  His rules were broken.  He was called to offer love and support and to raise this child, this child that, regardless of whether or not Joseph had a hand in the conception, would never really be his own.  The other side of the manger has no voice.  Instead, he was called to a silent commitment.  He was called to hold the child’s hand, lead him from the manger, and then let him go.  And then Joseph drops out of sight.  He was there twelve years later at the temple when Jesus left his parents but chances are that Joseph was used to Jesus going down roads without him by that time.

Not all of us are meant to be the stars of the play. Some of us have no speaking roles.  In fact, some of us never even make it to the stage. But the story is never complete without each and every one of us.  And those that stand with no voice in silent commitment and humble devotion are the hardest workers of all.  The years of Jesus’ life that were spent with Joseph are not documented in known Scripture.  They are not a part of our canon.  But Jesus had to have someone that took him by the hand and led him to the beginning.  The Gospel story did not just shoot out of thin air–someone was silently leading the way.  Someone early on had to make the conscious decision to silence the world and listen to God.  Someone had to stand on the other side of the manger.

I wish that the other night my Spanish had been not quite as rusty.  We were able to tell the story.  We were able to talk about what Joseph felt.  We were able to place the story in the proper context.  But there was an almost overwhelming silence.  When you’re standing on the other side of the manger, it is only God that you hear.  When there’s nothing to say, when you have no voice,  God still calls you to something bigger than you can possibly imagine.

In this season of Advent, give yourself the gift of silence that you might hear the song of God.