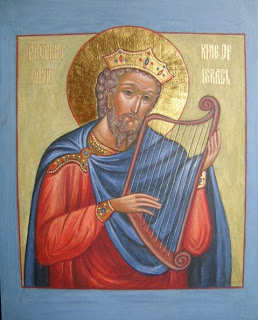 Lectionary Text:  1 Samuel 16: 1-13
The Lord said to Samuel, “How long will you grieve over Saul? I have rejected him from being king over Israel. Fill your horn with oil and set out; I will send you to Jesse the Bethlehemite, for I have provided for myself a king among his sons.” Samuel said, “How can I go? If Saul hears of it, he will kill me.” And the Lord said, “Take a heifer with you, and say, ‘I have come to sacrifice to the Lord.’ Invite Jesse to the sacrifice, and I will show you what you shall do; and you shall anoint for me the one whom I name to you.” Samuel did what the Lord commanded, and came to Bethlehem. The elders of the city came to meet him trembling, and said, “Do you come peaceably?” He said, “Peaceably; I have come to sacrifice to the Lord; sanctify yourselves and come with me to the sacrifice.” And he sanctified Jesse and his sons and invited them to the sacrifice. When they came, he looked on Eliab and thought, “Surely the Lord’s anointed is now before the Lord.” But the Lord said to Samuel, “Do not look on his appearance or on the height of his stature, because I have rejected him; for the Lord does not see as mortals see; they look on the outward appearance, but the Lord looks on the heart.” Then Jesse called Abinadab, and made him pass before Samuel. He said, “Neither has the Lord chosen this one.” Then Jesse made Shammah pass by. And he said, “Neither has the Lord chosen this one.” Jesse made seven of his sons pass before Samuel, and Samuel said to Jesse, “The Lord has not chosen any of these.” Samuel said to Jesse, “Are all your sons here?” And he said, “There remains yet the youngest, but he is keeping the sheep.” And Samuel said to Jesse, “Send and bring him; for we will not sit down until he comes here.” He sent and brought him in. Now he was ruddy, and had beautiful eyes, and was handsome. The Lord said, “Rise and anoint him; for this is the one.” Then Samuel took the horn of oil, and anointed him in the presence of his brothers; and the spirit of the Lord came mightily upon David from that day forward. Samuel then set out and went to Ramah.

Once again, God has called the most unlikely, the most unexpected, and the most unprepared candidate to do God’s work.  There seems to be a pattern here.  This time, God’s choice is a young, but apparently good-looking, shepherd, an eighth son, from the village of Bethlehem, and from a family with no real pedigree or appropriate ancestry at all.  And with this person, God lays the road for the hope of the world.  No pressure there!  But the unlikeliness doesn’t stop there.  What about Samuel? God called him to go to Jesse the Bethlehemite and anoint a new king. Well, I’m pretty sure that Saul (i.e, the King!) would not have been impressed with that had he found out. What if Samuel had just said, “You know, God, I would really rather not. That just doesn’t work into my plan.”?

In this Lenten season, what would change about our journey if we knew where we would end up, if we thought that we might end up in a place that we didn’t plan? And what would change about our life if we knew how it was all going to turn out? I mean, think about it…the boy David is out in the field just minding his own business and doing what probably generations of family members before him had done. He sees his brothers go inside one by one, probably wandering what in the world is going on. Finally, he is called in. “You’re the one!” “What do you mean I’m the one?” he probably asked in his teen-age sarcasm. “What in the world are you talking about? Don’t I even get a choice?” “Not so much.” And so David was anointed. “You’re the one!”

What would have happened if David has just turned and walked away? Well, I’m pretty sure that God would have found someone else, but the road would have turned away from where it was. It would have been a good road, a life-filled road, a road that would have gotten us where we needed to be. But it wouldn’t have been the road that God envisioned it to be.  We know how it all turned out. David started out by playing the supposed evil out of Saul with his lyre. He ultimately became a great king and generations later, a child was brought forth into the world, descended from David. The child grew and became himself anointed—this time not for lyre-playing or earthly kingship but as Messiah, as Savior, as Emmanuel, God-Incarnate. And in turn, God then anoints the ones who are to fall in line and follow him. “You’re the one”.

Do we even get a choice, you ask? Sure, you get a choice. You can close yourself off and try your best to hold on to what is really not yours anyway or you can walk forward into life as the one anointed to build the specific part of God’s Kingdom that is yours. We are all called to different roads in different ways. But the calling is specifically yours. And in the midst of it, there is a choice between death and life. Is there a choice? Not so much! Seeing the way to walk is not necessarily about seeing where the road is going. So just keep walking and enjoy the scenery along the way!

So, on this Lenten journey, look for the unexpected and walk toward it!