Skip to content
HomeLENT 3A: On The Outside Looking In 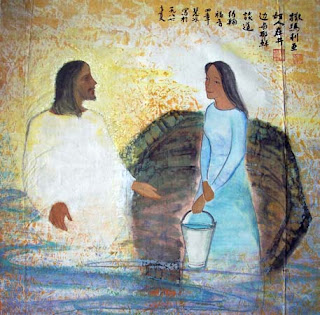 Lectionary Text:  John 4: 5-26 (27-42)
So he came to a Samaritan city called Sychar, near the plot of ground that Jacob had given to his son Joseph. Jacob’s well was there, and Jesus, tired out by his journey, was sitting by the well. It was about noon. A Samaritan woman came to draw water, and Jesus said to her, “Give me a drink.” (His disciples had gone to the city to buy food.) The Samaritan woman said to him, “How is it that you, a Jew, ask a drink of me, a woman of Samaria?” (Jews do not share things in common with Samaritans.) Jesus answered her, “If you knew the gift of God, and who it is that is saying to you, ‘Give me a drink,’ you would have asked him, and he would have given you living water.” The woman said to him, “Sir, you have no bucket, and the well is deep. Where do you get that living water? Are you greater than our ancestor Jacob, who gave us the well, and with his sons and his flocks drank from it?” Jesus said to her, “Everyone who drinks of this water will be thirsty again, but those who drink of the water that I will give them will never be thirsty. The water that I will give will become in them a spring of water gushing up to eternal life.” The woman said to him, “Sir, give me this water, so that I may never be thirsty or have to keep coming here to draw water.” Jesus said to her, “Go, call your husband, and come back.” The woman answered him, “I have no husband.” Jesus said to her, “You are right in saying, ‘I have no husband’; for you have had five husbands, and the one you have now is not your husband. What you have said is true!” The woman said to him, “Sir, I see that you are a prophet. Our ancestors worshiped on this mountain, but you say that the place where people must worship is in Jerusalem.” Jesus said to her, “Woman, believe me, the hour is coming when you will worship the Father neither on this mountain nor in Jerusalem. You worship what you do not know; we worship what we know, for salvation is from the Jews. But the hour is coming, and is now here, when the true worshipers will worship the Father in spirit and truth, for the Father seeks such as these to worship him. God is spirit, and those who worship him must worship in spirit and truth.” The woman said to him, “I know that Messiah is coming” (who is called Christ). “When he comes, he will proclaim all things to us.” Jesus said to her, “I am he, the one who is speaking to you.”

What was she even doing there, this woman of Samaria?  Here she was walking the streets alone, coming to the well in the heat of the day hoping that she wouldn’t run into any of the regulars.  She was tired of being taunted, tired of having to try so hard to ignore the cutting remarks and the cold stares.  And so she comes to draw water hoping against hope that no one would be there, to draw water from this old well steeped in history.  She was surprised when this man appeared.  He was a Jew.  What was he doing here in her city?  She put her head down, hoping that he would just pass by and be on his way.  She didn’t want any trouble.

The less than civil relationship between the Jews and the Samaritans dated back at least 1,000 years before the birth of Christ.  Both believed in God.  Both had a monotheistic understanding of the one true God, the YHWH of their shared tradition of belief.  But where the temple of YHWH for the Jews existed on Mount Zion in Jerusalem, the Samaritans instead worshipped God on Mount Gerizim near the ancient city of Shechem.  And with that, a new line of religious understanding was formed.  The Samaritans believed that their line of priests was the legitimate one, rather than the line in Jerusalem and they accepted only the Law of Moses as divinely inspired, without recognizing the writings of the prophets or the books of wisdom.   What started as a simple religious division, a different understanding of how God relates to us and we relate to God, eventually grew into a cultural and political conflict that would not go away.  The tension escalated and the hatred for the other was handed down for centuries from parent to child over and over again.

But this is not what Jesus saw in the woman.  He asked her for a drink and began a relationship that cut through 1,000 years of prejudice and hatred and outsiders.  Jesus saw her not as a Samaritan and not even as a lowly woman but as a fellow human, a sister, a child of God.  And somewhere in the conversation, the woman saw who Jesus was too.  He was no longer a Jew; she was no longer a Samaritan.  He was no longer the insider looking out; she was no longer the outsider looking in.  They were instead part of a shared humanity with a shared vision of what the world looked like.  The woman’s new life begins when she recognizes Jesus’ identity.

Now I don’t think that Jesus had some grand evangelism plan.  He was not trying to add numbers to his membership.  If you read the whole lectionary passage (I cheated and shortened it a bit!), the woman does not convert to Christianity (which wasn’t really invented yet!).  She doesn’t even convert to Judaism.  She is still a Samaritan.  In fact, it says that she drew other Samaritans into who Jesus was.  The point is that Jesus was not trying to build a flock of followers; he was trying to show people how to see that which illumined the Way to God.  The fact that they saw it was enough.  Perhaps the woman and her friends left after this and went to Mt. Gerizim to pray.  Thanks be to God!  Making disciples of Jesus Christ is not about increasing our church’s membersip.  It is not about forming people to look just like us or expecting them to change so that they can join our partying and praying clan.  Jesus didn’t expect the woman to change.  In fact, he didn’t even expect her to join him.  He just showed her what God’s love poured out into the world really looked like.  And from the outside looking in, she saw him.  And then she went to tell others.  Isn’t that what it’s about?  Maybe our problem is that we’re on the inside looking out.  Jesus is here, come to give each of us life.  Maybe when we’ve finished counting the offering and figuring out how many people were here today, we’ll finally look and see the One who offers us life, the One who brings all of the world into God.

So in this season of wandering and wondering, just learn how to see.

One thought on “LENT 3A: On The Outside Looking In”