LECTIONARY TEXT:  Romans 5: 1-11
Therefore, since we are justified by faith, we have peace with God through our Lord Jesus Christ, through whom we have obtained access to this grace in which we stand; and we boast in our hope of sharing the glory of God. And not only that, but we also boast in our sufferings, knowing that suffering produces endurance, and endurance produces character, and character produces hope, and hope does not disappoint us, because God’s love has been poured into our hearts through the Holy Spirit that has been given to us.  For while we were still weak, at the right time Christ died for the ungodly. Indeed, rarely will anyone die for a righteous person—though perhaps for a good person someone might actually dare to die. But God proves his love for us in that while we still were sinners Christ died for us. Much more surely then, now that we have been justified by his blood, will we be saved through him from the wrath of God. For if while we were enemies, we were reconciled to God through the death of his Son, much more surely, having been reconciled, will we be saved by his life. But more than that, we even boast in God through our Lord Jesus Christ, through whom we have now received reconciliation.

Thomas Merton said that “the Christian must not only accept suffering; the Christian must make it holy.”  That is very strange to us.  What exactly is holy suffering?  Suffering is bad; suffering is unbecoming; suffering is something that we all try to avoid.  So, how then, can we accept this claim that suffering produces hope?  Keep in mind that the early believers to whom Paul wrote were used to a Roman understanding of peace.  Augustus Caesar had established the Pax Romana, which sought to move in on the entire world.  It was an understanding of peace that would come from Roman prosperity and Roman power.  (I suppose they thought that peace would come if everyone else would just shut up and live the way they do!)  So, Paul is taking the “motto of the day” and turning it inside out.  This peace places its hope in glory; it is part of that larger hope of life in Christ. 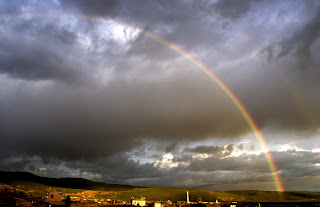 Today’s news, for me, does not echo chords of peace–a bombing at a Jerusalem bus stop, the military action over Libya, and rumblings of discords from other countries in the area.  And so our discussions about peace become discussions about power.  We seem to be arguing more over who is going to be in charge of the military operations than talking about peace.  Our vision of peace has a lot to do with who’s in charge, with who has the power.  Our idea of power is an end in and of itself, rather than a way to peace.  Maybe we could stand a little reframing from Paul too.  For us, suffering is a failure; within the vision of God, suffering holds hope for newness.  Because in the midst of suffering, just like in the midst of everything else, we find God.  God walks with us through it, loving us and holding us, perhaps even revealing a way out of it, if we would only listen, and gives us a glimpse of what is to come.  The suffering of the world reveals the heart of God, reveals the holiness that is, if we will only look.

Truthfully, I don’t know what perfect peace looks like.  Chances are, I, like all of you, would be limited by a peace that makes my life easier and a lot less scary.  That’s not what it is, comfortable and lovely as that may sound.  Perfect peace is not lack of suffering; it is oneness with God.  And oneness with God enables us to see holiness in everything, to see beauty where there is none, and to see light even in the darkness.  In this season of Lent, we once again walk toward the Cross, with the drums of discord, still this moment far in the distance, growing louder with each step.  This season lasts for forty days.  But those forty days do not include the Sundays of Lent.  Known as “little Easters”, they are opportunities to glimpse and celebrate the Resurrection even in the midst of darkness.  They are reminders that even in this season of Christ’s Passion and Death, their is always a light on the horizon.  Resurrection always comes.  But it’s not a fix; it’s not a reward for the most powerful; it’s what happens when God’s love is poured into our hearts.

So, in this Lenten season, definitely pray for peace but, in the meantime, walk toward hope.