LECTIONARY PASSAGE:  Romans 4: 1-5, 13-17
What then are we to say was gained by Abraham, our ancestor according to the flesh? For if Abraham was justified by works, he has something to boast about, but not before God. For what does the scripture say? “Abraham believed God, and it was reckoned to him as righteousness.” Now to one who works, wages are not reckoned as a gift but as something due. But to one who without works trusts him who justifies the ungodly, such faith is reckoned as righteousness.

For the promise that he would inherit the world did not come to Abraham or to his descendants through the law but through the righteousness of faith. If it is the adherents of the law who are to be the heirs, faith is null and the promise is void. For the law brings wrath; but where there is no law, neither is there violation. For this reason it depends on faith, in order that the promise may rest on grace and be guaranteed to all his descendants, not only to the adherents of the law but also to those who share the faith of Abraham (for he is the father of all of us, as it is written, “I have made you the father of many nations”) —in the presence of the God in whom he believed, who gives life to the dead and calls into existence the things that do not exist. 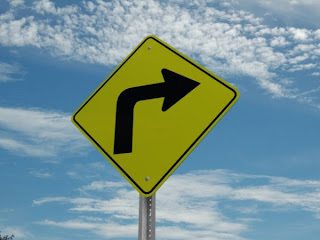 Driving in Houston is almost always a challenge, even for those savvy ones of us who grew up in the area and do it all the time.  There is something that you do not expect–a closed freeway (I actually think they do that every week-end whether they need to or not), a new pothole, or simply a major freeway or intersection that is completely stopped for no apparent reason.  In a city in which you can literally drive for two hours on a “good” traffic day and never actually leave the city, there is lots of room for things that get in your way.  One day not too long ago, I was driving on a road that I drive often.  I got to an intersection under the Southwest Freeway with which I was pretty familiar.  There is a sign there with an arrow on it that implies a right turn only onto the feeder from that lane.  But apparently one of the bolts had come out of the top of the sign and the sign had slid farther down the pole and upside down.  If I took the sign literally, it would have told me to turn the car around, go back from where I came, and turn the opposite direction.  No, that’s not right!

Even with signs all around us, we know the rules.  We know what it normal.  We know the way.  And in that respect, we are no different from those in the Roman Empire to which Paul was writing this passage that is part of our lectionary readings for this week.  They all knew that if they followed the rules and did what was expected, everything would be fine.  They would get what they deserved.  They would end up where they needed to be.  They would receive their reward.  But now Paul was telling them that these things that they thought would make them “right” with God didn’t really matter at all.  That was not the way it worked.  It had to be hard for them to hear.  According to Paul (and possibly a surprise to many of these first century hearers and a few of us!), God is not waiting around for us to do the “right thing” so that we can be in “right relationship” with God.  God blesses all of us, all of humanity, as children of God.