Today’s Gospel Passage:  John 13: 1-17, 31b-35
Now before the festival of the Passover, Jesus knew that his hour had come to depart from this world and go to the Father. Having loved his own who were in the world, he loved them to the end. The devil had already put it into the heart of Judas son of Simon Iscariot to betray him. And during supper Jesus, knowing that the Father had given all things into his hands, and that he had come from God and was going to God, got up from the table, took off his outer robe, and tied a towel around himself. Then he poured water into a basin and began to wash the disciples’ feet and to wipe them with the towel that was tied around him. He came to Simon Peter, who said to him, “Lord, are you going to wash my feet?” Jesus answered, “You do not know now what I am doing, but later you will understand.” Peter said to him, “You will never wash my feet.” Jesus answered, “Unless I wash you, you have no share with me.” Simon Peter said to him, “Lord, not my feet only but also my hands and my head!” Jesus said to him, “One who has bathed does not need to wash, except for the feet, but is entirely clean. And you are clean, though not all of you.” For he knew who was to betray him; for this reason he said, “Not all of you are clean.” After he had washed their feet, had put on his robe, and had returned to the table, he said to them, “Do you know what I have done to you? You call me Teacher and Lord—and you are right, for that is what I am. So if I, your Lord and Teacher, have washed your feet, you also ought to wash one another’s feet. For I have set you an example, that you also should do as I have done to you. Very truly, I tell you, servants are not greater than their master, nor are messengers greater than the one who sent them. If you know these things, you are blessed if you do them…“Now the Son of Man has been glorified, and God has been glorified in him. If God has been glorified in him, God will also glorify him in himself and will glorify him at once. Little children, I am with you only a little longer. You will look for me; and as I said to the Jews so now I say to you, ‘Where I am going, you cannot come.’ I give you a new commandment, that you love one another. Just as I have loved you, you also should love one another. By this everyone will know that you are my disciples, if you have love for one another.”

The meal was one of those moments that we wish we could freeze in time.  Everyone was happy, enjoying each other.  Jesus washed the feet of the disciples, the most intimate of acts.  It proved to be the beautiful epitaph of his servant’s heart, the gift of all gifts on a night that probably only he knew would be his last.  They ate and drank together, honoring the tradition of the Passover, remembering how God had delivered them from bondage, from those things that were not part of them, those things that did not fit with their identity as the people of God.  And at the meal, Jesus broke the bread and gave each one a piece, inviting them to share it with him.  And then he raised the cup…This is my body…This is my blood…Eat…Drink…Do this in remembrance of me.  Do this in remembrance of how God delivers you from bondage to those things that are not part of you.  There were others there…the clattering of dishes…the clanking of cups…the voices raised above the heat of the room.  And yet, somehow they thought it was just them. 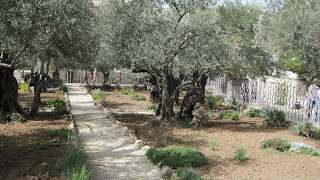 And then Jesus gets up to leave and asks them to come.  Let’s take a walk…let’s stroll through the cool night air.  It was one of those moments that we wish we could freeze in time…They walked toward the olive grove…Gethsemane, which means “oil press”, at the foot of the Mt. of Olives.  Jesus went to pray.  Well, we’ll just close our eyes and relax…He will be back in a moment.

I don’t think Jesus took them there because they were ready to hear what would happen.  I don’t think he took them there for support.  I don’t even think he took them there because he thought they would pray with him or something.  I think he took them there so that they would be part of the story, so that these moments that would become part of Jesus would also be part of them.  This was a holy place.  It probably didn’t look like it.  It really was just a bunch of dirt and grass with some olive trees stuck in them.  And it was cold as the damp night air settled in.  But it was here, in a moment frozen in time, that Jesus turned himself over to God.  “Take this cup from me”…not “get me out of this”, but “Take this cup from me”…the cup that he had shared with his friends…the cup that represented his body and his blood and the very essence of his being that he was willing to surrender, to pour out into the world.  “Take this cup from me”…it is time…a moment frozen in time…there is nothing more to do but for Jesus to pour his life into the world, whether or not they are ready, whether or not they even know it.  Father…forgive them…and “take this cup from me now”.

He returned to the sleeping disciples, the bumblers and the doubters, the deniers and the social climbers, the ones who were slow to get it and the one who would betray him.  He loved them all.  And now…they, too, must take the cup.

And in a flash, the frozen moment melts with a kiss of betrayal.  The cup spills into the crowd and Jesus is taken away.  The disciples are stunned.  What now?  What happened?  The world has moved on, but there was that moment…forever frozen in time.

On this holiest of nights, whether you are the sleeper, or the denier, or the betrayer, know that you are also the beloved…a daughter or son of God.  “Take this cup from me now”.