Skip to content
HomeSTATION XI: Jesus is Nailed to the Cross

Before the station, pray: I adore you, O Christ, and I bless you, because by your holy cross, you have redeemed the world. 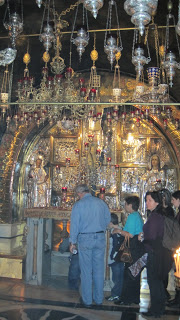 Read Mark 15: 22-33
Then they brought Jesus to the place called Golgotha (which means the place of a skull). And they offered him wine mixed with myrrh; but he did not take it. And they crucified him…

It is here that our regrets sink in. It is here that we want to go back. We would do it differently next time. We would not ask so many questions as to why he was doing what he was doing and to whom. We would just watch and listen and learn from him how to love. We would not fight and grapple with each other over who was in charge, over who was the most important, over who was his favorite. Instead, we would bask in his spirit and his radiance and his love of equality for all. And when asked if we knew who he was, we would not betray him. Rather, we would step forward no matter the cost. But we cannot go back.

The sounds are deafening. The clanging rings out over the land and settles into our hearts. A nail of greed. A nail of selfishness. Nails of betrayal and hatred and war. Nails of hunger and poverty. Nails of not accepting and loving each other. Nails of being so sure of one’s beliefs, so sure of one’s understanding of who God is and who God wants us to be, that we miss what God is trying to show us. It is finished. In the Name of Jesus Christ, you are forgiven. Father, forgive.

Jesus, I have many regrets in my life, even though I know that you offer forgiveness for all. Open that path of forgiveness that I may forgive myself and accept what you offer. Amen.